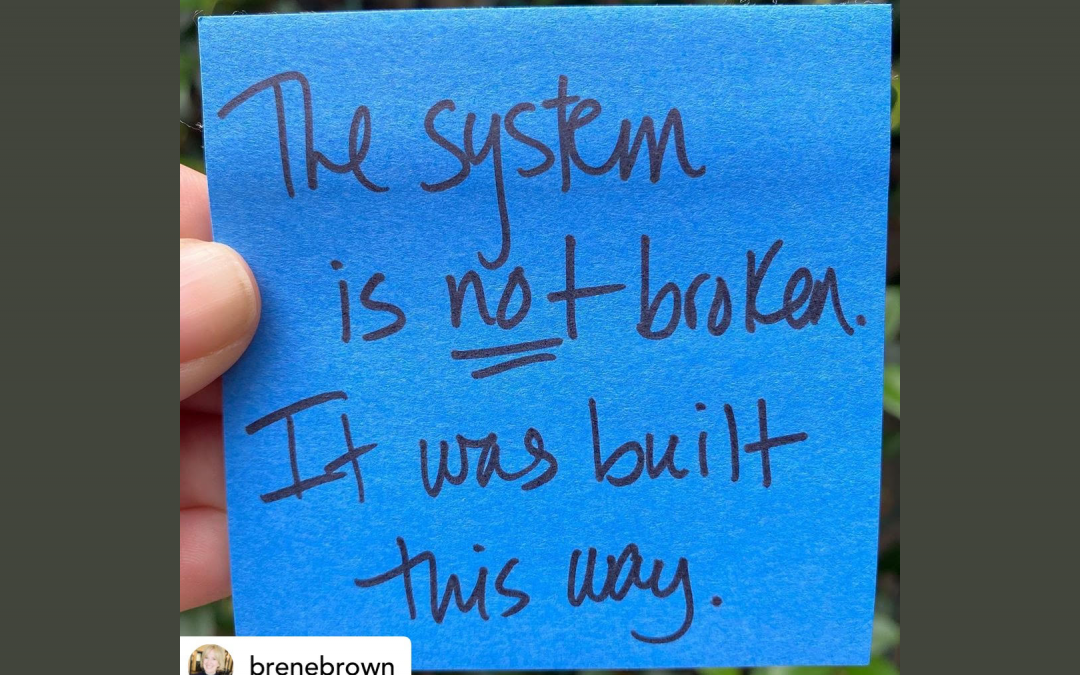 I’ve hesitated to write this. To be clear: I haven’t hesitated for even a breath on committing that #blacklivesmatter, but hesitated because I’ve never felt qualified or authorized to speak for “Yoga.”

I’m in the middle of a discussion about whether another organization should be public in supporting protestors for racial justice and how. Organizations that take a stand on a controversial issue that might be deemed “political” are potentially risking their funding, their standing in the community, even their tax deductible status.  I’ve been in discussions about this basic issue dozens of times in different organizations for decades.

But allies step in and speak up. Since I’m the decider for Breathing Space, I’m writing.

Violence and fear have been tools of oppression wielded against black Americans from the time that their ancestors were forced into slavery. Early in American history, powerful southerners realized that if poor “whites” identified with the plight of black and brown people that white landholders would be far outnumbered and overpowered. Government began institutionalizing racist policies to divide the people – literally creating privileges available only to whites and allying them with the wealthy elite. Meanwhile in the north, wealthy elites were fighting trade unions and starting the mythology and legal protections “freedom to work” and prohibiting collective bargaining. (If your formal education didn’t cover this, see the resources at the bottom of this post.)

Activism and alliances on racial justice, on economic justice, on justice, has been discouraged through institutions and laws from the beginning.

This is how our mission starts: Breathing Space supports healthy families . . . There are no qualifiers on that. Oppression and injustice are antithetical to health.

That’s pretty simple, but until it’s universally evident from equitable treatment and protections for all people, we have to keep saying it: #blacklivesmatter

The yoga community gets a reputation for being “all sunshine and rainbows,” “navel gazers,” “spiritual bipassers,”  None of that is Yoga. There are a number of Yoga concepts that relate directly social activism and, in this moment, that means racial justice activism:

Yoga – union. Kind of have to start here. Yoga means unity, oneness. I am you. There is no difference.

Maya – illusion of separateness, the element that creates difference and diversity in our conscious and bodily existence. This one is a bit complicated and different traditions interpret it differently. The one that resonates with me celebrates Maya for creating that diversity for that’s what makes Prakriti (our bodily experience) different from Parusha (pure awareness, where there is no separateness).

It is possible to see race, to affirm and embrace difference, and believe we are all one at the same time.

Ahimsa – non harming. Silence is implicit consent. Silence is harmful. Speaking up, acting, resisting harm to others is Ahmisa.

Viveka – discernment. The ability to see what is true and real. Recognizing that is our own thoughts that cloud our discernment is an important lesson. Researchers call this confirmation bias, the ability to see only that which agrees with our preconceived ideas. The yogi questions their own assumptions and seeks the truth.

Satya – truth. The yogi acts and speaks with integrity, always. This is both internal and external. We try not to tell ourselves lies, no matter how uncomfortable the truth might be.

Svadhyaya – self study. The yogi examines herself (with compassion and love) in order to better understand and respond more skillfully. In the present moment, that means recognizing our own racism, racism, and privileges. We take responsibility for when we have wronged others and work to do better in the future.

Aparigraha – non-attachment. This concept, along with surrender, gets a bad rap. Non-attachment does not preclude caring or acting, only attaching to particular outcomes or ideas of how we wish things were creates the true suffering of attachment. Non-attachment is required for true discernment.

Brahmacharya: Often translated as celibacy or abstinence, but in a more modern context can be seen to mean “right use of energy.” The yogi pays attention to how they are using their energy in everyday life.  Is where and how we are directing our energy helpful or harmful?  Beyond the obvious, this means taking a hard look at the way we are responding.

IIt’s possible to spend a lot of energy on “thoughts and prayers,” posting our outrage to social media, or crying real tears about the state of the world. This energy, however, isn’t accomplishing much.  Energy better spent might look like calling our legislators, researching the best organizations to support financially or through volunteering, or simply closing our mouths and listening to communities of color whose voices should be heard above our own.

This only scratches the surface of how yoga philosophy intersects with social justice. Yoga philosophy is vast and draws influences from Hinduism, Buddhism, and hundreds of years of tradition in India.

There’s nothing about Yoga that says be apolitical. Yes historically, yoga aesthetics isolated themselves for spiritual enlightenment, but most of us are not aesthetics. We are householder yogis – engaging in the world and using our yoga practice to help us do that with skillfulness, integrity, kindness, compassion, and love. Anything less is not yoga.

There are quite a few yoga students and scholars who can speak to this with much more eloquence and depth and I’m happy to refer if you wish to study further.

Jennifer Mueller has been teaching yoga for children and families in Washington DC since 2008. Jen is a Yoga Alliance® Experienced Registered Yoga Teacher (E-RTY 200), a Registered Children’s Yoga Teacher (RCTY) , and an International Board Certified Lactation Consultant (IBCLC).