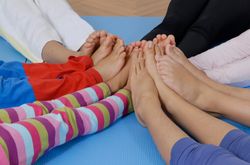 Benefits of Yoga for Children

Even elementary school kids deal with a lot of stress these days. As I let my 3rd-5th grade after-school yoga class into the room this past Wednesday, one of my students had near-panic written on her face. Before she even walked through the door, she asked if she could do her homework instead of participating. "I'll never get it all done tonight," she pleaded. I cocked my head to one side and looked at her. "Yeah, you're right. I need the yoga," she said and headed for a mat.

The highly controversial book The Science of Yoga: The Risks and Rewards by the New York Times' William Broad summarizes the studies on benefits of the practice for adults. A similar book on studies about the benefits to kids would be mighty thin. Parents and teachers who witnessed those benefits will tell you that yoga is great for kids.

Preliminary research on child-specific benefits include reduced problem behavior, test anxiety, and anger and increased feelings of well-being, self-regulation, and focus. The video below discusses the results of a pilot study with 4th and 5th graders in Baltimore.

Yoga classes offered in studios may be structured very much the same as a class offered in a school, but they are often very different.  Michelle Kelsey Mitchell from Yokid wrote a very nice blog post on the subject after hosting a writer from the Chicago Tribune at one of their classes. Yoga classes in schools tend to be noisier and more chaotic and the environment often isn't ideal, but the objective and results are very much the same:

"Studio: students who achieve a quieter mind, enjoy relaxation and appreciate the time “away” from their busy and stressful lives. Students who get that much closer to their True Self…….      School:  the exact same thing."

What Do Kids Do in Yoga in School?

While many of the poses will look familiar to adult yogis, there's much more emphasis on games and social interaction in a kids class. We always do a physical warm up to get the body moving and calm the mind. Then we might play a game, act out a story, or do partner exercises. Toward the end of class, we'll wind down with some more poses and do a final relaxation or guided meditation.

In that 3rd-5th grade class I mentioned above, we focused on stories this past week. After we warmed up, I told The Magic Pear Tree from Sydney Solis's Storytime Yoga. We identified the characters and actions and assigned yoga poses to the story and then we acted them out.

After that story example, I passed out yoga pose cards and the students worked in small groups to write their own story. We could have done this exercise for much longer than the time availabe. It was quite the hit last week.

In other classes, we'll get silly and try to pass a hula hoop around the group while everyone holds hands, pass a balloon using only their feet, or blow cotton balls across the floor.

I love the photo of the girl "meditating" in this post because I recognize the attitude and it could easily be one of my kids. Upper elementary school kids are starting to put up emotional walls as they near adolescence. Approval from peers becomes more and more important. When everything is working in yoga class, they get to let their guard down a bit and just be.